A document in Elastic search can be considered as a row in relational database. A document might have different data types.

Inserting documants in index is called as indexing.

Inverted Index is backbone of Elasticsearch which make full-text search fast.Inverted index consists of a list of all unique words that occurs in documents and for each word, maintain a list of documents number and positions in which it appears.

To make inverted index each document will split in words and create below sorted index. 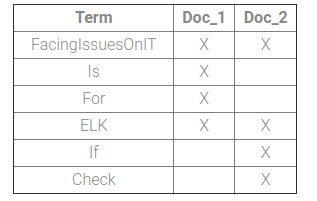 Now when we do some full-text search for String will sort documents based on existence and occurrence of matching counts. Usually in Books we have inverted indexes on last pages. Based on the word we can thus find the page on which the word exists.

3. What are shards and replicas in Elastic Search?

Due to resource limitations like RAM, vCPU etc, for scale-out, applications need to employ multiple instances of ElasticSearch on separate machines. Data in an index can be divided into multiple partitions, each handled by a separate node (instance) of ElasticSearch. Each such partition is called a shard. By default an ElasticSearch index has 5 shards.

Each shard in ElasticSearch has 2 copy of the shard. These copies are called replicas. They serve the purpose of high-availability and fault-tolerance.

4. What Is The Query Language Of Elasticsearch ?

There are several types of nodes such as

A Master node is a node that controls the entire cluster.

A data node is a node that holds data in it and performs logical operations on the data.

An Ingest node is a node that can be used to ingest pipeline which means a series of processors to a document to perform some transformations before indexing the document.

A Tribe node is a node that performs some coordination to connect to multiple clusters across all the connected clusters and perform some logical operations or searches.

By default, a node will always be a master node and a data node, but depending on the large requirements, node configurations should be carried out.

5. What Is A Cluster In Elasticsearch ?

Cluster is a collection of one or more nodes (servers) that together holds your entire data and provides federated indexing and search capabilities across all nodes. A cluster is identified by a unique name which by default is “elasticsearch”. This name is important because a node can only be part of a cluster if the node is set up to join the cluster by its name.

6. What is a Tokenizer in ElasticSearch ?

Tokenizers are used to break a string down into a stream of terms or tokens. A simple tokenizer might split the string up into terms wherever it encounters whitespace or punctuation. Elasticsearch has a number of built in tokenizers which can be used to build custom analyzers.